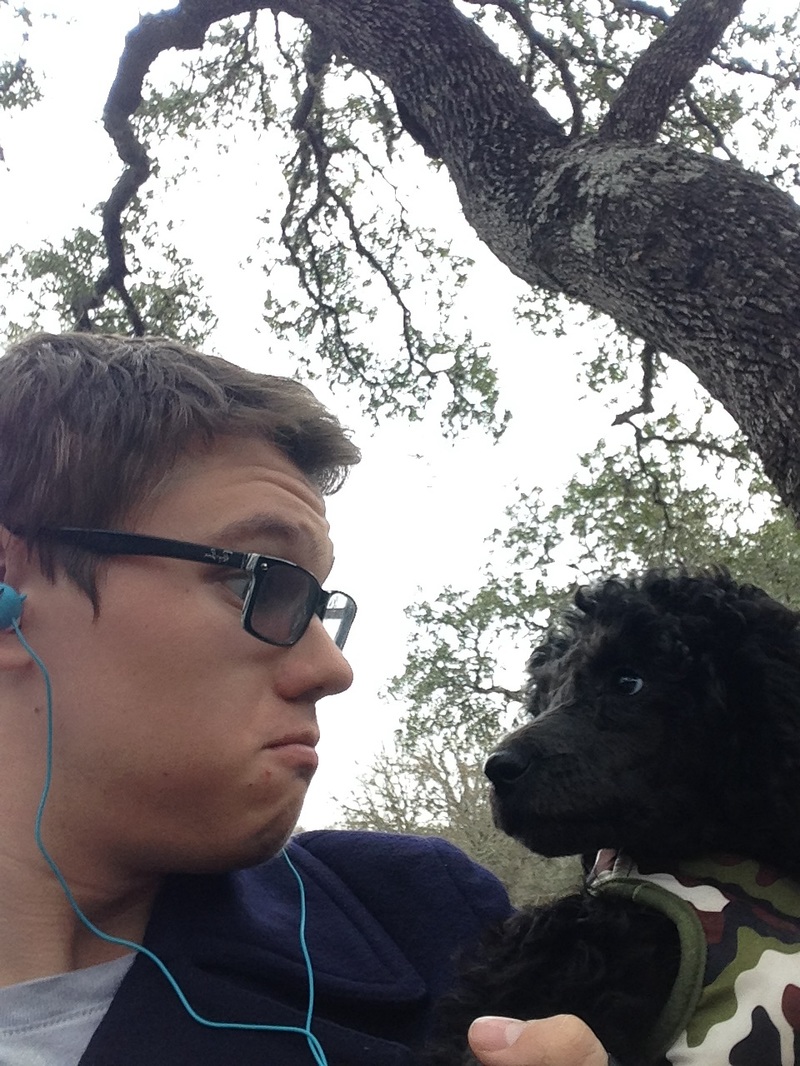 Marie and I have been very close pals.  She is my big baby.  Nothing says I love you like a giant dog putting their paws around your neck and just hugging you.  I have enjoyed being around dogs for my entire life.  We relocated to Texas over 10 years from Chicagoland's Northwest Indiana region over 10 years ago.  We had an odd combination.  My family raised Rottweiler's and we also had small poodles, 2 1/2 and 5lbs.  How can you forget our ferocious Nana, the big German Rott who would stand in the long 300 yard drive as if she would eat the very driver.  Little did they know with one pet she would lick them to death.  My parents owned a farm and there were goats, chickens, geese, ducks, turkeys, rabbits, and fancy pheasants.  My father's garden was dedicated to providing fresh vegetables for his extended family, the farm critters as mom called them.

After our last Rott passed, my mother had some rules about dogs.  No shedding, no doggy odor, and hypo-allergenic.  So as I longed for a big dog again I had to follow those rules.  First of all, our dogs were not allowed in our kitchen, absolutely no hair in our food and hair on the clothes, no happening.  Poodles fit that bill.  Then going over to friends house who had Labradors or goldens, or even my married sisters doodle, you could go in the house and say "they have a dog."  Yes you know what I mean, maybe not stinky, but that rolled in the grass dog odor.  I remember my sisters dog you could bath her and with an hour, she would come and you would smell "dog."  So poodles fit that bill.  Finally, hypo-allergenic, my dad did not want to have to wash his hands or take Benadryl because he pet the dog or the dog was in the room he was in, which he did with Rotts.  So poodles fit that bill.  The one bill poodles did not fit, they were so tiny!!!!

I remember the day I seen the man riding his bike with stoic standard and royal giant poodle running next to him.  Black Beauty!  I had really never seen a huge poodle before.  That was it, my big dog was going to be a standard poodle or giant poodle as some at the larger end are called.  As I did my research I learned that the larger poodles are rising in popularity against there tiny relatives over the past decade.  Poodles are one of the oldest breeds.  They were prized by fisherman because of their love of water in Europe.  In addition they were known as the ultimate bird dog by hunters because of their intelligence.  Hunting poodle trainers will tell you they are a little more difficult t train because they don't just run, jump and get.  They think!  They want to please and they think about what is the very best thing to do.  Poodles reigned with royalty and with the wealthy who viewed them as the ultimate companion and hunting dog.  Although the term "French poodle" caught on, and the French don't mind, the poodle is not a French discovery or breed.  Although the French did work to size down the poodle to the various sizes we see today, it definitely was a very popular dog from England, Germany, Russia, to France.

My families love of animals and studying to be in the medical field, it was only natural that I decided to breed my amazing girl.  After all we have a vet in the family, teacher, and others in the medical field.  So that is where I my family got to where we are today.  We have my few amazing poodles.  So if you are looking for a puppy from someone who shows, that will not be me.  Although I respect the show ring, we purchased one of the ones that didn't make the cut years ago, whom had 50+ champs in the lineage.  The first visit to the vet and we were told that dog had to be free it had so many things wrong with it.  Thankfully we had a vet in the family.  The breeder never returned our calls.  So we know for every dog that makes the ring, many others don't.

I believe you need to look at the pup, it's look, stance and personality and decide for yourself that it is what you want.  Like everything else, in dog breeding there is always the search for that new fad to raise prices and have the newest thing.  When we bred animals over the years we did many of the recommended testing and wow could we brag.  However how embarrassing it was as we learned that maybe we had just jumped on the fad band wagon.  We've learned that when you have good lines like the century old poodles you don't have to jump through hoops.  The most important thing is that the breeder stand behind their line with a health guarantee.  A lot of the conditions like eye testing only tells you that the eyes are o.k. now.  Genetic eye problems do not normally flair up until after dogs are past breeding age so you really aren't getting more than a guarantee and probably $300 added to the price of the pup that the dog passed their current eye test.  I have tested many dogs and never had a bad report.  In addition the available PRA-A test ONLY test for on condition, not all.  You want a dog with bad hips, look at people, what does overweight, inactive, or lack of general health do to human knees and hips?  True for the standard poodle, only a small number have the problem, which is most often from tight inbreeding to keep a trait in the line.  If I found a congenial defect in a dog it would be immediately removed from breeding.  On the other hand people need to understand the silliness of a vet saying "it's a genetic issue."  First of all, we are all 100% genetic based, so you do need to look at the breed and find out what genetic issues are keen to that particular breed.  A person who has seen health issues related to the breed know that they have some issues and should retire the line.  However, living things have issues, especially as you age, so just because a dog has a health issue it does not mean the breeder produces bad pups.  It can just be living.  Breeders who say their dogs have "no defect" are nuts!  First of all one cannot see inside, nor most cannot predict the future.  A good breeder does their best to have healthy parents and life will be life.  People tend to think they can find the bionic dog, problem free, no sickness, etc.  Your dog will get diarrhea, will vomit, will cough, will catch something and need a vet visit and your dog could very well get cancer or get diabetes if overweight like humans at some point in their life.  Make sure that if you are paying big money because someone it touting testing, that they guarantee that your pup will never have problems for those conditions or full refund.  They won't!  We believe in good health and watching your lines, that is the best guarantee.  Our dogs come from good clean lines.

So now you know our philosophy.  You will not find every color, every size, or puppies galore year round.  I'm just a quality loving poodle owner who has a couple great dogs and am happy to share my limited pups when we have a litter.  I hope you see the greatness in this breed as I do.  They are truly wonderful dogs!!!  Enjoy my site.  I keep it real and will treat you the same.  I stand behind my canine companions as some of the nicest around.